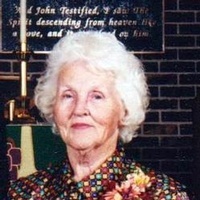 The funeral service will be held 10:30am Monday, March 12, 2018 at Leverington Funeral Home of the Northern Hills in Belle Fourche. Visitation will be held Sunday from 4 to 6pm. Interment will take place in Black Hills National Cemetery

Memorials are preferred to the Weston County Manor.

Grace was born August 14, 1927 in Albert Lea, Minnesota to John and Grace Van Middendorp who immigrated to this country from Holland. When she was young they moved to a farm near Rock Valley, Iowa where she was raised with 4 brothers, Johnny, Marion, Wayne, and Alvin, also 3 sisters, Jeanette, Evelyn, and Esther (Tootie). Grace, being one of the older children worked both inside with her mother helping with the care of her younger siblings, and outside milking cows, and also in the corn fields.

In 1960 they moved out west to Belle Fourche, South Dakota to raise their 6 children. Grace worked outside the home providing janitorial services to several businesses in Belle. She utilized her cooking skills by operating the café at Belle Livestock for a few years. She later worked at a local restaurant as a pastry cook and was highly praised for her delicious pie. Henry and Grace resided in Belle Fourche until 1985 then moved to Gillette Wyoming. Henry passed away from cancer in 1987.

She was a truly practical, clever and talented woman. She was an accomplished seamstress, and a great cook. She had a green thumb and loved her flowers. Her hobbies were numerous, she was a very good bowler, belonging to league for several years and won many pins and trophies. She made crepe roses, collected oak antique furniture, loved going to second hand stores , enjoyed going to Deadwood, looked forward to her bingo nights with friends and her grandkids , had several collections including music albums, buttons, picture frames, fabrics, and a lot of antique items. She was very determined and did things in her way and in her own time. in her later years she cut thousands of quilt squares. She also made dishcloths to sell at the Senior Center.
In 2007 Grace was no longer able to live alone so she moved to Sundance WY to live with daughter Linda and her family for about 2 years. She then went into long term care in Sundance for 2 years then moved to Newcastle to their Special Care Unit in 2012 where she resided until her death.

Grace is preceded in death by her son Eldon, husband Henry of 41 years. Her parents, brothers Johnny, Marion, and Wayne, and sister Evelyn.

To send a flower arrangement or to plant trees in memory of Grace Olson, please click here to visit our Sympathy Store.

To order memorial trees or send flowers to the family in memory of Grace Olson, please visit our flower store.