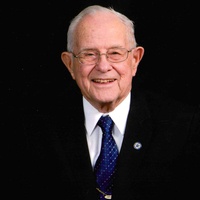 Alvin C. Shaw, age 96 of Belle Fourche, peacefully passed away on Saturday, February 6, 2021 at Belle Estate in Belle Fourche, surrounded by prayer, family, and the staff “angels” who took care of him for the past 3 years.

The funeral will be live-streamed from the funeral home’s website, on Al’s obituary page, located at: www.LeveringtonFH.com and a video tribute will be posted there as well.

Memorials can be directed toward the First Congregational Church or your “give-back” volunteer time to the Belle Fourche community in Al’s honor.

Al came into life on July 8, 1924, at Slayton, MN to Gertrude and Curt Shaw.  At age 4, Al and his mother contracted diphtheria which took his mother’s life.  Al and Shelly (brother) went to Iowa and were raised by their paternal grandparents.  Marlys (sister) stayed in Minnesota to be raised by their maternal grandparents.  Curt (father) settled in Belle Fourche about 1939 and the three children were joined together again where all 3 siblings spent the rest of their lives in Belle Fourche.  Al joined the Army Air Force in 1944 and flew 31 missions as a ball turret gunner on a B17.  He was discharged from service in 1945.  Al was very proud to be a WWII veteran and spoke highly of his crew as it takes courage and trust from each crew member to make each mission successful.  For the last 20+ years Al faithfully wore his WWII hat with honor. His last mission was in 2010 on the SD Honor Flight to visit all the Washington DC memorials.

Upon returning from service, Al worked with his family in the Case Farm Implement business until it was sold in 1951.  With partner Dale Henderson, they started an auto parts business called E & B Supply.  In 1960, Dale retired and Al merged his E & B Supply business with Cris Hoseth to become Hoseth Auto Electric, Inc.  In 1967, Cris retired and in 1969 Hoseth Auto became affiliated with Big “A” Auto Parts.  More importantly, Al found the love of his life, G. Marie Conner.  They were married on September 1, 1946 and had two children, Randy and Denise.  Al and Marie provided unconditional love and defined the true meaning of family and friends.  In 1978, Randy joined Al in Hoseth Auto Electric and expanded to Spearfish.  Al retired in 1986, which looking back, Al always said was “too early”!  With all his energy and love of the Belle Fourche community he wanted to “give back” as a token of his appreciation.

Al was active in many civic affairs; to name a few, he served on the Chamber Ag Committee and Chamber Ambassadors, North Central Health Services Board, charter member of the Moose Lodge, Lions Club member, 30-year member of the Belle Fourche Volunteer Fire Department along with serving two terms on the Belle Fourche Country Club board of directors.  Al was active nearly every day of the week on projects ranging from delivering Meals on Wheels to driving the DAV van, a total of 1,387 miles, taking Northern Hills military veterans to medical services, which he faithfully continued until age 90.  Many times he was the oldest one in the van!  One of his last services was participating in the Belle Fourche Honor Guard.  Al and Marie were long-time active members of the First Congregational Church.  Marie passed away in 2008.

“My Soul Gives Glory to My God”

“Of the Father’s Love Begotten”

“Won’t You Let Me Be Your Servant”

To send a flower arrangement or to plant trees in memory of Alvin C. Shaw, please click here to visit our Sympathy Store.

To order memorial trees or send flowers to the family in memory of Alvin C. Shaw, please visit our flower store.