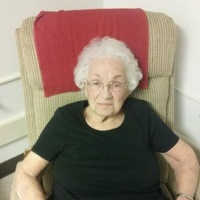 The funeral service will be held 11am (Central) on Monday, July 30th, 2018 at St. Paul’s Lutheran Church in Freeman, SD. Pastor Matthew Resner will officiate.  Following, interment will take place in the Freeman City Cemetery.

Anita Marie Schamber was born February 6, 1919 in Freeman, SD.  She was the daughter of Richard and Caroline (Haar) Schamber.  Anita grew up in Freeman and she graduated there from high school in 1937.  Following, she earned her Teacher’s Certificate at the Freeman Academy, and with that Anita became a country school teacher.  She taught country school in Tripp SD for several years, and that is where she met her future husband, Francis Davis.  In 1943 they were married in Sioux Falls.  Following their marriage, Francis left to serve in the U.S. Army, in the European Theatre during World War II.  He returned home in 1945, and they would never be apart again, until Francis’ death in 2007.  For many years they lived in Tripp SD where Francis worked at the grain elevator.  They also lived in other small towns in eastern South Dakota.  In 1982 they retired and moved to Custer where Francis operated the train in the Flintstone Park until 2000.  For the past 3 years, Anita has lived in Belle Fourche.

Anita was a wonderful mother and grandmother.  She was always happy and thankful for her life and her faith, and her family.  She lived with no regrets and she will be greatly missed by her family.

To send a flower arrangement or to plant trees in memory of Anita M. Davis, please click here to visit our Sympathy Store.

To order memorial trees or send flowers to the family in memory of Anita M. Davis, please visit our flower store.