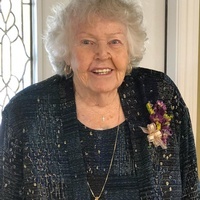 Visitation will be held from 4 to 6:30pm Wednesday at Leverington Funeral Home of the Northern Hills in Belle Fourche.   Following, there will be a Wake Service held at the funeral home. Mass of Christian Burial will be held at 10:30 am Thursday, December 20th, 2018 at St. Paul's Catholic Church in Belle Fourche. Interment will take place in Pine Slope Cemetery.

Betty Jean Dyke was born September 2, 1928 in Meadow, South Dakota.  She was the daughter of Irwin and Genevieve “Gladys” (Munyon) Dyke.  Later, the family moved to Lemmon SD.  Betty had a childhood that was filled with challenges and numerous hardships.  At the age of 8, following the death of her mother, Betty was orphaned. More than one person helped her get through those difficult years.  They included the Cloistered Sisters of the Benedictine Order for several years.  At the age of 16, Betty moved to Sturgis where she lived at the St. Martin Academy.  There, her future mother-in-law, Marion Eixenberger, supervised her and Betty graduated from high school.  It was there that Betty met Edward Eixenberger and they were married at the St. Martin Chapel.  To this union, 9 children were born.  Following their marriage, they lived in Oshoto, WY for a short time before moving to Belle Fourche where Edward worked for LP Larson and Baroid.

Betty was a devoted wife and mother and she was a caregiver to many.  She always made sure there was food on the table and she learned how to sew and make clothing.  She took in boys from Sky Ranch and retired veterans.  The house was always full of activity.  She also enjoyed dance classes and traveling later in life.  Recently, she celebrated her 90th birthday in style with over 150 friends and family.  It meant so much to Betty to see everyone there.

Betty will be remembered for being a good woman who was generous and faithful to her God.  She lived out her faith and was an example for many. She was an active participant in Altar Society, Catholic Daughters, Bible studies where she made many good friends, she taught Catechism, where adults today especially remember her advent wreath kits she made for every student, Marriage Encounter, and Search. She supported Right To Life, EWTN, Bella, Wounded Warriors, and ERTZ. Betty was ready to begin her next journey after living this earthly life.  She was more than ready to meet her family who have gone on before her, but most important to her, was to be with her Lord.

May God Bless the Memory of Betty Eixenberger.

“Mine Eyes Have Seen the Glory”

All of Betty’s Grandchildren

To send a flower arrangement or to plant trees in memory of Betty Eixenberger, please click here to visit our Sympathy Store.

To order memorial trees or send flowers to the family in memory of Betty Eixenberger, please visit our flower store.