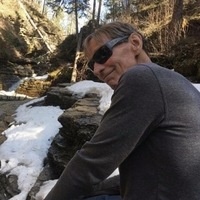 Calvin Meyers, 60, of Belle Fourche, gained eternal healing Saturday, March 7th, 2020, following a lengthy battle with cancer.  He was surrounded by his daughters when he went home to heaven.

A celebration of his life will take place 10:30am Friday, March 13th, 2020 at the Countryside Church in Spearfish.  Visitation will be held from 5 to 7pm Thursday at Leverington Funeral Home of the Northern Hills in Belle Fourche.  Interment will take place in Pine Slope Cemetery.

In lieu of flowers, memorials are preferred to the Sturgis Dragway or the Head and Neck Cancer Alliance.

Cal was a life long resident of Belle Fourche. From early youth, he loved anything with an engine, boats, snowmobiles, motorcycles, four-wheelers, drag, muscle, and super cars; go carts, etc. After working several years for Lindstad’s Alignment, he made the jump to business owner. In 1992 he and Jana purchased Green’s Alignment. It was a business he adored and was successful with, and where he enjoyed being generous to customers.  He was a self-taught and talented mechanic who could often diagnose problems with just his ears. After 25-years he was forced to retire due to health issues.

Calvin owned over 200+ cars during his life. If it had an engine, it pulled him in like a magnet.  He was an avid Green Bay Packers fan and also a big fan of drag racing. In 2016, he was diagnosed with Head and Neck cancer.  For the next four years he would endure over 100 chemotherapy infusions, and countless trips to hospitals. He loved life and his daughters immensely so lying down and giving up on life was never an option. He’s been a survivor all his life, and also an inspiration to thousands of people. Cal was a wonderful father to all four daughters, who could not been more proud of him.  He loved them and they love him back so much.  He will be greatly missed and forever cherished.

He was preceded in death by his parents; son, Chase Meyers; sister, Sharon Shear; brothers, William and Richard Meyers; and a special friend, Russ Powell.

To send a flower arrangement or to plant trees in memory of Calvin Meyers, please click here to visit our Sympathy Store.

To order memorial trees or send flowers to the family in memory of Calvin Meyers, please visit our flower store.