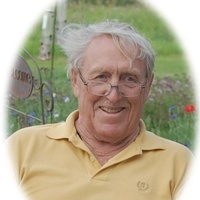 Dennis Edward Cockrell was born July 12, 1941 in Redfield, South Dakota.  He was the son of Harry and Elsie (Kisner) Cockrell.  Dennis grew up on a family farm near Tulare, SD.  He graduated from the Tulare High School and began working for Chicago Northwestern Railroad (CNW).  In 1979 he was united in marriage to Colleen Tracy in Waubay SD.  To this union was born 3 children: Traci, Hope, and Nick.  Following their marriage, they lived on the farm in Tulare and later they moved to Pierre.  In 1986 they moved to Belle Fourche,SD, where the railroad eventually became Union Pacific Railroad (UP).  Dennis worked many years for the railroad following the company to Lusk WY in 1996.  He retired from the railroad in 2004.

Dennis was a kind-hearted, gentle man.  In his younger years he specialized in building race cars and he was an avid hunter and fisherman.  Dennis loved animals especially his dogs. He enjoyed gardening and wood-working and he loved his children.  Papa Cockrell, as the grandkids called him, was a wonderful grandfather and he will be missed greatly by his family.

He was preceded in death by his parents; brothers, Clayton (Susie) and Merle Cockrell; and sister, Harriet (Neil) Binger.

“Old Hundreth”, “May the Choir of Angels”,

“How Great Thou Art”

To send a flower arrangement or to plant trees in memory of Dennis Cockrell, please click here to visit our Sympathy Store.

To order memorial trees or send flowers to the family in memory of Dennis Cockrell, please visit our flower store.