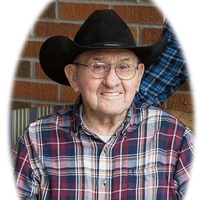 A Memorial Service will be held 10 am Saturday, November 13th, 2021 at Leverington Funeral Home of the Northern Hills in Belle Fourche.  There will be no visitation.  Inurnment will take place 9am Monday, November 15th at Black Hills National Cemetery, with Military Honors provided by the Belle Fourche Veterans Honor Guard.

Earl’’s funeral will be broadcasted live online, on his obituary page located on the funeral home’s website: www.LeveringtonFH.com, where there is also a video tribute available to view.

In lieu of flowers, any memorial money will be used in Earl's memory to enhance to environment for the current and future residents at Avantara St. Cloud in Rapid City

Earl Dean Capp was born November 16, 1931 in Faith, South Dakota.  He was the son of Mathias and Anna (Schnoor) Capp.  He was the youngest in a family of 10 children.  In his younger days, he attended country school.  He and two of the next youngest siblings would take a wagon and team to the Faith sheep yards to pick up injured but salvageable lambs to raise into their first herd.  He started his cattle herd by catching heifer calves at two different calf catching contests.  After 6th grade, he left school and moved to Long Valley, SD to help Bill and Ruth Capp with their ranch. Soon enough, a neighbor took a liking to Earl, and he met Alfred and Peggy Good and their young family and he formed life-long friendships.  Even though he was a hired hand, they treated him as if he was one of their own children.

While attending dances in the Faith and Dupree areas, he took notice of a beautiful brown-haired girl, Alice Lavonne Ross. (The way he would tell it, even deep into his dementia, she was the prettiest girl he had ever seen.)  She encouraged him to move back to Faith, so he moved back and started working for his brother Howard.  They were married June 7, 1952, and shortly after that Earl was drafted into the Army and was sent to Korea. He returned from Korea in 1954, and his first son, David, was born in 1955.

The young family moved to Arpan, SD around 1958 and in 1960 their second son, Dennis, was born.  Earl and Alice ran a band of white-faced sheep, a small herd of milk-cows, from which they sold the milk and cream, and they also sold eggs in Belle Fourche.  Earl worked for the U and I Sugar Factory and for Dr. Buck, veterinarian. With every penny, they scrimped and saved to buy more livestock and to put together more tracts of land for the Earl Capp Ranch.  In 1965, their third son, Darin was born, and their family complete.  In 1967, Earl went to work as a Ringman at Belle Fourche Livestock, and he and Alice bought the Oliver and Helen Herrett place. During the next several years he became a director for the Belle Fourche Irrigation District and a Director for Farm Credit where he served for 24 years.  He was a 4H Club Leader when his boys were growing up.  He took each of his sons on a special graduation trip when they graduated from high school.  He took David hunting in Red Lodge, Montana. He took Dennis elk hunting their five years later. Then he took Darin on a white water rafting trip in Jackson Hole, Wyoming.

Earl and Alice enjoyed traveling with their 5th wheel camper and their camper club, the Black Hills Hillbillies.In 2011, Alice passed away from cancer, and turned Earl's world upside down. She had been compensating for his dementia and when she was gone this became very apparent. Within a year Earl was in a nursing home placement. The family would like to thank the caregivers at Bella Vista Nursing Home in Rapid City, David M. Dorsett Nursing Home in Spearfish and Avantara St. Cloud Nursing Home in Rapid City, not only for treating Earl like family for all these years, but for treating us like family too.  We appreciate that you supported us both times when we tried to bring him home, and that you supported us both times when we had to bring him back. Caregivers are unsung heroes.

To send a flower arrangement or to plant trees in memory of Earl Capp, please click here to visit our Sympathy Store.

To order memorial trees or send flowers to the family in memory of Earl Capp, please visit our flower store.