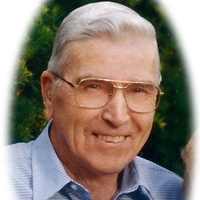 The funeral service will be held 11am Friday, February 7, 2020 at St. James Lutheran Church in Belle Fourche, with visitation held one hour prior to the service at the church.

Interment will be held 11:30am Saturday at Restlawn Memory Gardens Cemetery in Huron.

Earl Henry Neumeyer was born March 26, 1925 in Beadle County South Dakota, near the town of Alpena.  He was the son of Edward and Anna Marie (Pederson) Neumeyer.  Earl grew up on a family farm.  As a result of growing up in the “Dirty 30’s”, Earl had a strong work ethic all his life and it began in his youth when he worked hard to help support his family.  Earl served his country in the U.S. Army during World War II.  He served four years.  He was united in marriage to Doris Meisenhelder on October 20, 1946.  Later, during the Korean War, Earl was recalled to the service.  He worked for many years in the plumbing business, including as part owner of the Burnison and Neumeyer Plumbing. Earl was the SD State Plumbing Inspector and he also worked for HUD and the Bureau of Indian Affairs.

After retiring, they moved to the Black Hills and settled in Belle Fourche.  After her passing, Earl continued to live there.  He loved his daily get togethers for coffee in the morning with his great friends.  He enjoyed sports, especially baseball.  And in his younger years he enjoyed hunting and fishing.  Earl was a good man who would do anything for anybody, and he will be greatly missed by his family and friends.  Earl loved his children, grandchildren, and great grandchildren very much.  He cherished the times and memories he spent together with family.

He was preceded in death by his parents; wife, Doris; and 4 sisters, Amy Holland, Velma Luckey, Joy Jones, and Geraldine Boster.

To send a flower arrangement or to plant trees in memory of Earl Neumeyer, please click here to visit our Sympathy Store.

To order memorial trees or send flowers to the family in memory of Earl Neumeyer, please visit our flower store.