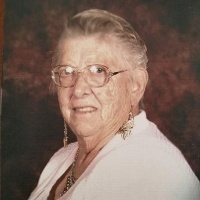 On July 18, 2019, in Grand Terrace, CA, our precious sister, mother, grandmother and friend, Eleanor Mae Simmons went to be with the Lord.

Eleanor Mae Simmons, 82, Newell, was born on July 19, 1936 in Belle Fourche South Dakota.  She was the fourth child born of five to her biological father Neil Garrett and mother Edith Garrett.

Eleanor lived her earlier years in various places throughout the midwest.   As a young girl she moved with her seven siblings, mother and stepfather Ben Kidd to Upton, Wyo.  In April of 1952, she met and began dating Virgil Simmons from New Castle, Wyo. and upon completion of high school they were united in marriage on May 23, 1954.  They moved to Nisland, SD and began ranching until 1961 when they switched to an owner operating dairy business. In 1998 they sold their business and took up residence in Newell, S.D.  Virgil and Eleanor had four children; Douglas, Linda, Cindy and Nancy.  They were married for 57 years until Virgil’s death on November 8, 2011.

Besides Eleanor’s love for her family and friends, she shared a passion for cooking, baking, sewing and crocheting; all of which won numerous ribbons at local and state fairs.  She also took up a business as a cake decorator and years later she was employed as cook by her longtime friends Dean and Marlene Vetter at their restaurant “Moms” in Sturgis, SD.  She then challenged herself even further by working as a state licensed Cook I at New Dawn’s Rehabilitation Center in Vale, SD from 1998, until her retirement in 2009 at the age of 75.  Upon request, she returned as cook again at New Dawn Center for another year. She joined neighboring clubs and leagues and was an avid reader of books and a competitive card player.  She loved to travel and Virgil and she would vacation yearly to either of their daughter’s homes in California or Montana or her sons home when he lived in Wyo.  She took a road trip to California once with her best friend June Kosola, which coined them the knick names, “Thelma and Louise’ by friends and family.

She is preceded in death by her husband and parents; brother Ronald Garrett; sisters Delores Lane and Leona Garrett; daughter Linda Richter.

Everyone who knew her will remember her for her immeasurable kindness.  She will be greatly missed and in our hearts forever.

Services will be at 10:00a.m. Friday, July26, at Newell Evangelical Church in Newell with the Rev. Tom Martin officiating.  Visitation will be one hour before services. Interment will be at 12:30p.m. Friday July 26, at Black Hills National Cemetery near Sturgis, S.D.

“You Are the Reason”

To send a flower arrangement or to plant trees in memory of Eleanor Simmons, please click here to visit our Sympathy Store.

To order memorial trees or send flowers to the family in memory of Eleanor Simmons, please visit our flower store.