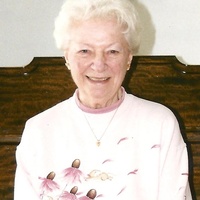 Eunice K. Fox, age 92 of Buffalo SD, went home to heaven, with her family by her side, on Friday, January 25, 2019 at the Belle Fourche Healthcare Center.

Eunice Kathryn Dake was born September 7, 1926 at the ranch home of “Uncle Jack and Aunt Katie” Booth, located southwest of Buffalo.  She was the daughter of Martin and Una (Cammack) Dake.  Eunice attended the Ladner School for eight years and in 1940 she moved into Buffalo to attend high school there.  She and her sister Ethel lived together by themselves in a one-room place for the first year.  The second year their parents rented a small house.

After two years of high school, Eunice met Lloyd Fox.  On June 9, 1943 the couple were united in marriage in Broadus, Montana.  Eunice was 16 years old.  To this union were born four children: Sherry, Vicki, Deby, and Russell.  Lloyd and Eunice lived for 2 years northwest of Redig, on the East Short Pines Ranch, owned by the Fox family.  When Lloyd received the call to serve in the U.S. Army, they moved to Belle Fourche and rented a small cabin that they could afford.  There, Eunice started working for a small grocery store.  Later on, her parents purchased a small house and Eunice lived there until Lloyd returned home from the service.  Eunice also worked at the Belle Fourche Bank until a deal was made with the Fox family for the purchase of the Short Pines Ranch.  They loved the place and lived there until Lloyd died on December 11, 2001.  They were married nearly 60 years.

Eunice was a member of the Grand River Lutheran Church and more recently a member of the Freedom Life Outreach Family Church.  She was also a member of the VFW Auxiliary and the Smilin’ Thru Extension Club. She was very artistic, a wonderful cook, and she had a talent of telling jokes – especially Ole and Lena jokes.  She enjoyed music, dancing, singing, playing piano (especially her baby grand piano), singing and sewing.  She once played in a band and from a very early age she played piano by ear.  She was very proud of her family and she will be greatly missed by them all.

Grateful for sharing life with her are her children, Sherry (Jim) Sobotka of Pine Haven WY, Vicki (Mark) Heairet of Belle Fourche, Russ (Kathy) Fox of Buffalo; numerous grandchildren, great grandchildren, nieces and nephews.  She was preceded in death by her parents; husband; sister, Ethel; daughter, Deby; and an infant granddaughter.

To order memorial trees or send flowers to the family in memory of Eunice Fox, please visit our flower store.