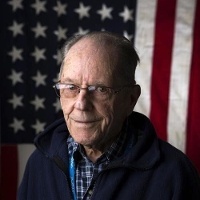 A celebration of his life will take place 10 am Saturday, October 12th, 2019 at St. James Episcopal Church in Belle Fourche, with Pastors Evelyn Weaver and Sandy Williams officiating. Military Honors will be provided by the Belle Fourche Veterans Honor Guard.   Following, a luncheon will be served in the church hall.

Funeral arrangements are with Leverington Funeral Home of the Northern Hills in Belle Fourche.

James Sidney Lang was born in Lead, SD on March 11,1924, to Sydney H. and Viola (Stephens) Lang. He graduated from Belle Fourche High School class of 1942. Jim proudly served in the US Army during WWII in the Pacific Theatre. He was a lifelong member and former Commander of the American Legion Post No. 32 and active in Disabled American Veterans (DAV).

Jim and Grace Amanda McGuffin were married on Christmas Eve in 1949. They had two daughters, Lise and Lorna. Jim was a banker for over thirty-six years, first with the First National Bank of the Black Hills and then with Norwest Bank when they bought out the former. He retired in 1983. His beloved wife of 45 years died in 1994.

Jim was a loving husband, father, grandfather, and great grandfather. He was a proud South Dakotan, devoted to his community. Jim was a lifelong member of St. James Episcopal Church in Belle Fourche where he served as the treasurer for many decades. Jim was an active member of the Belle Fourche Cowboy Band playing the flugelhorn and later the baritone. The Belle Fourche Roundup was Jim’s favorite time of year, and he attended for nearly 90 years. Jim loved collecting, watching basketball, travelling, music, dancing and bowling. He stayed active in bowling leagues until age 90.

He is survived by two daughters, Lise and Tim Crowley (Aptos, CA), Lorna and Mike Richey (Spearfish, SD), four granddaughters: Sydni, Jess, Mary, and Shelly and three great-grandchildren. He was preceded in death by his parents, wife and sister, Mary Clark.

To send a flower arrangement or to plant trees in memory of James S. Lang, please click here to visit our Sympathy Store.

To order memorial trees or send flowers to the family in memory of James S. Lang, please visit our flower store.