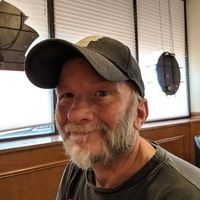 John F. Kunerth was named for his father’s only brother, who died in an accident before John was born. The F in his name was both a source of embarrassment and pride: Florian.

He was teased as a kid by children who called him Fluoride. But as an adult, John always signed his name John F. Kunerth, which make him sound a little like President John F. Kennedy. They shared the same initials.

John Kunerth, age 58 of Belle Fourche, died from natural causes on Sunday, November 17, 2019 at his home.

Born September 9, 1961 in Ames, Iowa to Bill and Willie Kunerth, John was the sweet one in the constellation of four children. He was good natured, kind, and pretty well behaved. He possessed what his older brothers never had: a practical intelligence that understood how things work.

John demonstrated that skill with the claw machine at carnivals, splicing barbed wire to a strength that withstood stretching while fencing, and a proficiency with a pool cue. He had a little snort of a laugh when that trick shot on the pool table amazed his opponent.

In the way he sized up angles on the pool table, John could look at a problem and see a hands-on solution.

He might have made a good handyman or carpenter or mechanic, but the jobs John held mostly required that he be dependable and hard working. He drove a forklift for many years in Des Moines, Iowa, and worked in the Thrift Store at the Salvation Army in Spearfish.

He loved, and lost, his wife Kathy, who died of Huntington’s Disease. He loved, and treasured, his daughter Stephanie, who inherited of his sweet side.

John was a lifelong fan of the Chicago Cubs and Bears, and all things Iowa State. He had a large appetite for good home cooking and a fondness for animals. There were many dogs in John’s life. His last was a three-legged stray he named Neveah – heaven spelled backwards.

Bald-headed and bearded, John tried to disguise his vulnerability by wearing biker attire, a chain linking his wallet to his belt. It was a good façade for someone who lived a hard life.

But to those who knew him best at the end, John is remembered for his gentle spirit and generous disposition. In the end, his struggles never penetrated to the sensitive tenderness that was the core of Johnny.

“John was a light in our Thrift Store,” said Rae Jean Bosley, his boss at the Salvation Army. “He taught us all how to be kind.”

John was preceded in death by his father, William; and his wife, Kathy.

A Celebration of Life service will be held 10 am Saturday, December 14, 2019 at St. James Episcopal Church in Belle Fourche with Pastors Evelyn Weaver and Sandy Williams officiating.

To send a flower arrangement or to plant trees in memory of John F. Kunerth, please click here to visit our Sympathy Store.

To order memorial trees or send flowers to the family in memory of John F. Kunerth, please visit our flower store.