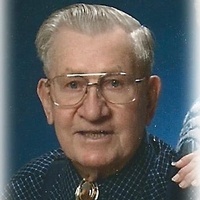 Leo Erhart was born January 19, 1922 at his parent’s homestead located 17 miles south of Almont, North Dakota.  He was the son of Florian and Anne (Steckler) Erhart.  Leo was baptized at St. Joseph’s Catholic Church near Almont and at a young age he moved with his family to Columbus, Montana where he grew up on a farm.  In May of 1932, the family returned to the North Dakota farm.  During World War II, Leo served in the U.S. Army, along with his three brothers.  All four served in combat areas, and all four returned home safely.  Leo was united in marriage to Irene Schafer on May 19, 1947, in Glen Ullin.  To this union six children were born: Dennis, Linda, Cal, Allen, Janet, and Bonnie.  In 1950, they moved to Spearfish and in 1957 they began their business, “Leo’s Bus Service” which was owned and operated for many years.  In 1976 they moved to a farm near Bozeman Montana and in 2003 they came to Belle Fourche where they have lived since.  Irene died December 27, 2014, after 67 years of marriage.

After retiring, Leo and Irene enjoyed traveling, square dancing, and especially their 3-month trip to British Columbia, and Alaska.  Leo was member of the Spearfish Fire Department for 19 years.  He enjoyed hunting and fishing and he loved collecting and restoring antique cars.

To send a flower arrangement or to plant trees in memory of Leo Erhart, please click here to visit our Sympathy Store.

To order memorial trees or send flowers to the family in memory of Leo Erhart, please visit our flower store.