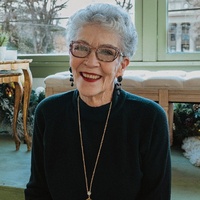 Her life will be celebrated on Monday April 25, 2022 at 1Oam at the Nisland Independent Community Church, with Pastor Doug Clark officiating.  Mary’s funeral will be broadcasted lived from her obituary page, located on the funeral home’s website: www.LeveringtonFH.com

Funeral arrangements are with Leverington Funeral Home of the Northern Hills in Belle Fourche.

Mary Laddie Brewer was born October 27, 1939 near Lawton, Oklahoma.  She was the daughter of Jess and Hattie (Clarke) Brewer.  Mary grew up in the Lawton area, and graduated from Lawton High School in 1957.  Her first job in life was mowing lawns at a young age.  Her second job involved babysitting four children and cleaning for a neighbor family.  During the summer before her senior year in high school, Mary got a job at a variety store.  One day while cruising 2nd Street in Lawton, Mary met her future husband.  Jerry Goeringer and Mary were married on December 26, 1959 at Chattanooga, Oklahoma.  Mary worked for the Oklahoma Tax Commission for a few years, but shortly after their marriage, Mary and Jerry moved to South Dakota where they farmed for several years.  Together Jerry and Mary farmed in the Castlerock area, and raised their family in Newell, South Dakota.

Jerry and Mary enjoyed spending time in Sun City, Arizona.  Jerry died in 2016, and shortly after, Mary settled in Prescott Valley Arizona.  Mary will be remembered for being a spunky, loving, and wonderful mother and grandmother.  She was talented at gardening and landscaping.  She also enjoyed golfing and sewing.  Family was the most important thing to her, and her and Jerry were the “glue” that held everyone together.  They are both going to be missed so much.

May God Bless the Memory of Mary Laddie Goeringer.

“Master of the Wind”

(Recording by the Gaither’s)

To send a flower arrangement or to plant trees in memory of Mary Goeringer, please click here to visit our Sympathy Store.

To order memorial trees or send flowers to the family in memory of Mary Goeringer, please visit our flower store.