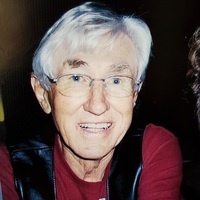 Services are tentatively being planned for October 16th.

Funeral arrangements are pending with Leverington Funeral Home of the Northern Hills in Belle Fourche.

Maury is survived by his wife Patty of Spearfish; sons, Craig (Greta) of Reno NV, Darren (Pam) of Huntington Beach CA, Blake of Italy; and daughter, Laura of Paradise CA.

Maury’s dad, Ahmed, was a Turkish immigrant who thought he was going on a train to Chicago.  Instead, he wound up in South Dakota  where he worked for the Homestake Mining Company until he started a taxi service (and drove Herbert Hoover around) and then opened the Hudson-Terraplane dealer in Deadwood (where the VFW is now).  Along the way, Ahmed met Rose Crossman.  They married and had two children, Zara, and Maury.  Sadly, Zara passed away at age 6.

In some way, Maury might have tried to make up for Zara’s short life by filling his life to the brim.

Maury was captain of both the football and basketball teams at Deadwood High School (as well as the 1949 Homecoming King his sons found out when they attended a football game with him in Deadwood during November, 2014).  Go figure.

After high school, he took a crack at Colorado A&M (now Colorado State), but college was not for him so he joined the Navy.  In the Navy his love for flying blossomed as he was stationed at Litchfield Naval Air Facility in Goodyear, Arizona, maintaining aircraft.

After his time in the Navy, he joined Douglas Aircraft as a draftsman working on the DC-7 and DC-8 aircraft.  In pursuit of new challenges, he then transferred to the Nike Ajax and then Nike Hercules surface-to-air missile systems.

Maury’s work with the Nike program took him and the family to Carrizozo, NM and then El Paso, TX, where he worked at Fort Bliss, and at White Sands Missile Range.  It was in El Paso that he acquired his first airplane, a 90 horsepower Aeronca Champ, that he landed on a field near the trailer park in which the family lived and that he bulldozed out of the desert.  He often took the boys up in it (which did not make Sue, who was not a big fan of flying, too happy).  The older boys still remember being given the stick to fly the plane (at ages 4 and 6)--even though their feet could not reach the rudder pedals.

In 1962, an opportunity came along that in many ways shaped his life.  Maury was asked to go to Germany to work with the Dutch Air Force on its Nike program.  So, off the family went.  They remained in Germany for over four years, first in Muenster and then in Bad Nauheim.  Maury and Sue lived a quite the glamorous life during their sojourn in Germany, often being invited to the officer’s club bashes (Dutch, German, US or British, they were invited to them all).  The boys attended school, first on an English Army Base and then on a US Army Base.   The family travelled extensively, including to Paris, Rome and Brussels, In 2006, Maury and his sons took a brief trip to Germany and visited their former homes in Muenster and Bad Nauheim.

Sue finally got tired of Germany (there were still some memories of WWII in her mind and the weather was a bit chilly and grey) and the family returned to the US in 1965, settling in California.  There, Maury and Sue bought their first home, but they did not stay long as Douglas offered Maury a position on the Greek island of Crete, installing a Nike missile system used for training NATO troops.

A fond memory of the time on Crete was when the Greek Air Force team from the base challenged the American tech reps to a game of basketball.  No one knows if they had checked Maury’s basketball resume’, but suffice to say the Americans (with no subs and all of them smokers!) won.

Upon returning to California in 1968, the family moved to a larger house, still in Huntington Beach, and Maury returned to working on his first love--airplanes.  He worked as an avionics engineer for both the DC-9 and DC-10 programs.  Maury also had the opportunity to work on the USAF’s classified Manned Orbiting Laboratory program and later on the Saturn moon rocket as a member of the S-IVB team at Douglas.

Despite all of this, Maury found the time to manage his son Darren’s Little League baseball team (even though Maury had never played baseball).  The team turned out to be quite good and Darren was its star player.

But airplanes were still his first love and he was given an assignment in Madrid, Spain, in 1973 to deliver Iberia Airlines first DC-10 aircraft.  So, it was time to pack up the house and off to Madrid for six months.

After returning to California, Maury continued working on the DC-9, DC-10, MD-80 and MD-11 aircraft programs for many years, even after the mergers with McDonnell and Boeing.  That work took him around the world (including to China before you could easily go there) on a demonstration tour of the improved DC-9. In the 1980's he was selected to participate in the delivery of a new MD-80 aircraft to Sardinia, Italy for Alisarda airlines. His son Blake was living in Sardinia at the time and met him and the team from Douglas when they landed at Olbia airport. He also had extended assignments in Karachi, Pakistan and Nairobi, Kenya,

It was in Karachi, Pakistan, that he developed his love for tennis by playing with the pro at the hotel in which he stayed.  The pro kept telling him to “Hit it Mr. Etem” and so he did for most of the rest of his life.  Upon his return to the US, he joined a local tennis club and he, Sue, Craig and Darren spent many happy hours playing and socializing.  In some ways, Maury’s kids think tennis was what kept Maury and Sue together.  Eventually, however, it was not enough and the two divorced in the mid-80s.

Maury was a regular at Meadowlark Airport (now a parking lot) in Huntington Beach, California and bought another airplane - an Aerospatiale Rallye that he flew all over Southern California. His sons inherited his love of aviation and two of them also obtained their pilot's licenses. His son Blake followed in his career footsteps and works with military aviation at different locations in Europe and Middle East.

During the 1990's Maury came out of retirement briefly to work at the Cambridge, England airport on a refurbishment program for DC-10 aircraft. While living in Cambridge he was neighbors with Stephen Hawking, the renowned scientist and author.

Maury kept playing tennis and met the love of his life, Patti (through tennis).  They were married and were basically inseparable from that time on.  Upon retirement from what was now Boeing, Maury and Patti moved to Spearfish, where Maury would spend the rest of his life.  Part of that time was spent as a volunteer coach of the tennis teams (boys and girls) at Spearfish High School.  Maury and Patti were also very active with the Spearfish Chamber of Commerce, where Patti continued to work.

Although distance separated Maury from his children, he remained a very proud parent until the end of his life.  Each of Maury’s children is extremely grateful for the devotion and care that Patti showed Maury.

To send a flower arrangement or to plant trees in memory of Maury Etem, please click here to visit our Sympathy Store.

To order memorial trees or send flowers to the family in memory of Maury Etem, please visit our flower store.