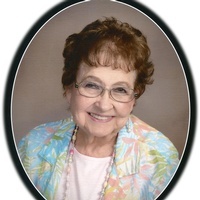 Long time resident and former business woman Peggy (Hodge) Larrabee Moore passed away May 6, 2019 in Spearfish, South Dakota. She was born August 9, 1931, in Aberdeen, SD to Leonard Hodge and Ruth (Haka) Hodge.  She grew up on a ranch and attended grade school at Reva, SD.  She moved to Belle Fourche in 1945 to attend high school, graduating from Belle Fourche High School in 1949.  She was married to James Larrabee on October 20, 1950.  James passed away in 1977. Four children were born of this union.  She was married to Robert Moore May 27, 1989, until his death in 2016.

Peggy worked at Montgomery Ward, Montana Dakota Utilities and Hodge Bootery.  Her husband James and she started Larrabee Wood Products, where she became bookkeeper.  After the death of James, she operated Larrabee Wood Products for two years.  She worked at Sears, at Stoves and More, Black Hills Art Craft and the Belle Fourche Chamber.  She served as a Chamber of Commerce board member and also a term on the Belle Fourche Economic Development board.  She served several years as a Chamber Ambassador.

Peggy has been active in Beta Sigma Sorority since 1966, Laureate Xi Chapter.  She was honored as Valentine Queen twice and Girl of the Year four times.    She has been a member of the United Church of Christ since 1946, serving as Financial Secretary and Treasurer and on the Trustee and Diaconate boards.  She volunteered in several capacities and was active with her class reunions.

She was proceeded in death by her first husband James Larrabee and second husband, Robert Moore; her parents Leonard and Ruth Hodge, a brother Daniel Hodge and a sister Sharon Crabbe.

A Farewell Message from Peggy

Don’t mourn for me, and don’t be sad.

For I’ve been happy with the life I’ve had.

I’ve been a daughter, mother, lover and wife,

And being a grandma has completed my life.

Remember the good times we have shared,

And know that I really cared.

If I touched your life and made you smile,

Think fondly of me for a little while.

My family was very important to me,

To see them grow and to set them free.

You have always been a source of pride,

You have been successful in things you’ve tried.

I have been lucky in love, not once but twice,

Both times I have been happy and had a good life.

Remember me and know I loved you so much,

And my extended family, we’ve all kept in touch.

It isn’t that I’m afraid to die,

It’s just hard to have to say goodbye.

“In the Garden”, “The Old Rugged Cross"

Recessional Hymn – “What a Friend We Have in Jesus”

To send a flower arrangement or to plant trees in memory of Peggy Larrabee Moore, please click here to visit our Sympathy Store.

To order memorial trees or send flowers to the family in memory of Peggy Larrabee Moore, please visit our flower store.