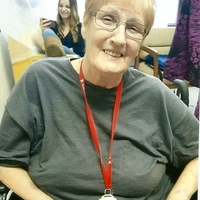 Her life will be celebrated 10am Friday, November 1st, 2019 at Leverington Funeral Home of the Northern Hills in Belle Fourche with Randy Bradley officiating.

A visitation will be held 4 to 6pm Thursday, October 31st.  Inurnment will be in Rockham, SD, hometown of her husband Rick Michels.

In lieu of flowers, memorials are preferred.

Ruth Mary Skogen was born to Clifford and Mary (Gerbracht) Skogen on May 12, 1947 at the Springer “Hospital” in Hettinger, before there was a real hospital in the town.  She began life on the family farm eight miles north of Hettinger where she and her older brother Gary lived in the very house in which their father Cliff had been born. After her father joined the North Dakota National Guard and war broke out in Korea, her mother, along with Gary and Ruth, moved to Camp Rucker, AL, and Fort Benning, GA, to keep the family together. Ruth always remembered fondly living in the South, eating boiled peanuts, and the wonderful African-American woman who sometimes babysat her and her brother. In 1952, the family returned to Hettinger and the family farm. Never one to spend any time doing “farm work,” she stayed in the house with her mother and learned to be a tremendous cook, a passion that benefitted family, friends, and visitors to her home.

In 1961 Ruth’s parents bought a hardware store in Hettinger and moved the family into town, the same year she began high school. Gone were the days of riding the station wagon “school bus” to and from school each day. In the place of that she could now get an after-school job, which she landed as a waitress at the City Café, a job she thoroughly enjoyed and held through her high school years.  After graduation from Hettinger High in 1965, she enrolled at Stewart School of Hairstyling in Aberdeen, SD. Graduation from there in 1966 also saw her marriage to Lyle Stotz from Tolstoy, SD. Four children would come from this union: Shelly, Johnny Russell—who died in infancy—, Tina, and Andrea. This marriage ended in 1985 when Ruth moved to western South Dakota.  Demonstrating her determination to make it on her own, she then enrolled in a computer technical program at Western Dakota Tech, Rapid City, SD, from where she graduated in 1987. With that degree she got a job at Black Hills Special Services, Belle Fourche, where she worked with very “special people” for twenty years before retiring.

In the early 1990s Ruth met the love of her life, Rick Michels. They were united in marriage in Deadwood, SD, on her birthday, May 12 (so Rick would only have to remember one date), 1995. Marriage to Rick brought three more children into her life: Jackie, Christie, and Joey, all whom she loved as her own. With a huge capacity to love, she also “adopted” Christie’s special friend Brooke Lunders as another daughter.  While her final years, and particularly months, were very difficult, Ruth never complained and took great comfort in the love of all her children and grandchildren. Of the latter, Brady Hakala became a special companion to her when his mother Christie moved into the house to help care for her.

Ruth was preceded in death by one son and her parents.

To send a flower arrangement or to plant trees in memory of Ruth Michels, please click here to visit our Sympathy Store.

To order memorial trees or send flowers to the family in memory of Ruth Michels, please visit our flower store.