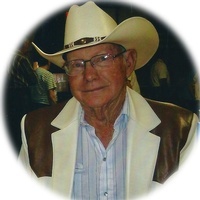 Wallace Lyons, age 87 of Hulett WY, died Tuesday August 7, 2018 at his home, with his loving wife by his side.

The funeral service will be held 10 am Thursday, August 16th, 2018 at Leverington Funeral Home of the Northern Hills in Belle Fourche.  Visitation will be held 5 to 7pm Wednesday with interment in the Pine Slope Cemetery.  Military Honors will be provided by the Belle Fourche Veterans Honor Guard.

Wallace Boyd Lyons was born March 29th 1931 to Walter and Florence Lyons in a sod house at Hoover SD. He was one of six siblings. He attended school at Newell SD and Rapid City SD but did not graduate high school because he enlisted in the Navy.  Wally’s military career spanned 21 years including 8 years in the Navy and 13 years in the Air Force.  He met Marlene (Midge) Black at a dance in Oakland CA while he was going to Navy Law School. They were married on June 12th 1953 at Reno NV. To this union they had 3 children, Walt, Darylinn and Shelly. The service took him overseas to Guam and Wiesbaden Germany. He spent a brief time as a civilian in between those enlistments working for a railroad company, the Dodge Company installing transmissions and a tomato factory.  His last assignment in the service was being transferred from Andrews AFB to the Pentagon where he worked with the Air Force Command Post. He retired from the Air Force in 1972 as a Senior Master Sergeant. Shortly before retiring he began his lifelong dream of being a rancher raising livestock in Maryland on a small acreage. Between 1972 and 1973 he relocated the family back to Custer SD and continued with his livestock on rented farms while also working in the boiler room at the State Hospital in Custer.

Wally and Midge moved to the Arpan area renting land and building a fine sheep herd along with his cattle until he purchased his own ranch in the late 1970’s. He worked hard along with his family to build his herd and produce the finest wool and animals that he could.  Wally loved to hunt and always had many stories of his hunting escapades to share. He went to Vo-Tech at Sturgis SD for cabinetry and along with his class made kitchen cabinets for his daughter and son-in-law. He continued with his skills making cabinets and gun cases that are still enjoyed by family. He also was a skilled leather worker making many beautiful gifts for family and friends.  After his divorce from Midge in 1994, he married Elizabeth Wilson Baker on January 23, 1996 and for the last 21 years they have lived at Hulett WY on a picturesque ranch. Wally and Elizabeth worked together side by side raising and selling Tennessee Walking Horses along with a fine herd of sheep. Over the years Wally and Elizabeth made numerous improvements including an indoor arena, sheds, corrals, and fences. He always kept things well maintained and beautiful. He was a hardworking man his whole life and took great pride in his ranch, livestock and family. His knees had too many miles on them and in the end he had to painfully shuffle with canes and relied on his puddle jumper to get around the ranch but he never gave up his dream of ranching that had become his reality.  We are grateful that he was able to keep his dignity and remained at home with his wife by his side on the ranch that he loved so much.   He was a member of the Naja Shriners, Masonic Lodge, Cowboys, and Jesters. He always loved to be part of the parades enjoying the company of his fellow members.

Wally often mentioned that he was born in the wrong era. He was a cowboy at heart who followed his dream and lived it to the fullest right to the end. He will be greatly missed.

He was preceded in death by his parents; wife, Marlene “Midge” Lyons; and brothers, Larry, Daryl, and infant, Ernest.

To send a flower arrangement or to plant trees in memory of Wallace Lyons, please click here to visit our Sympathy Store.

To order memorial trees or send flowers to the family in memory of Wallace Lyons, please visit our flower store.