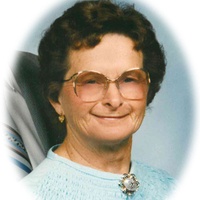 The funeral service will be 10:30 A.M. Tuesday, January 25, 2022 at the Christian Life Center in Belle Fourche. Visitation will take place 5 to 7 P.M. Monday at Leverington Funeral Home of the Northern Hills in Belle Fourche. Interment will be held in Rosehill Cemetery in Spearfish.

Memorials are preferred to the Christian Life Center.

Willie’s funeral service will be broadcasted live online, on her obituary page located on the funeral home’s website: www.LeveringtonFH.com

Willanore Louise Dunn was born September 13, 1927 on the Dunn family ranch in Harding County, South Dakota. She was the daughter of Herman and Blanche (Thomas) Dunn. Herman and Blanche were good parents and taught their children to be kind and godly. All their children attended a one room school through 8th grade. Afterwards, Willie attended Belle Fourche High School, graduating in 1945. After High School Willie went home to herd sheep for her dad. The following year when she turned 18, Willie went to Belle Fourche and got a job at Northwestern Bell Telephone Company as an operator. In her last year working there, Willie had become the Chief Operator. During this time her parents sold the ranch and moved into Belle Fourche. Willie was able to live with them again until her marriage to Lyle Ruby on April 29, 1949. That date was also the 35th wedding anniversary of her parents. It’s also an interesting fact that both couples were married by Methodist pastors with one arm. Following their marriage, Lyle and Willie lived in Deadwood where Lyle worked at a milk processing plant. Their two sons Wayne and Dale were born while they lived there. In 1955 they moved into Belle Fourche where Lyle had a bulk gas truck route for Patron’s Oil. Their daughter Cindy was born in Belle. In 1965 they purchased some dairy cows and rented a place to start milking. They then purchased the farm and moved to the country where they dairy farmed for 30 years. In 1997, Lyle’s health failed and the farm was sold and they moved back to town. Lyle passed in 2003. Together they were blessed with 54 years of marriage.

All in a day’s work was having a hot meal ready for family and friends at all hours of the day, lambing, feeding bottle calves and lambs, bookkeeping, feeding and caring for chickens and other poultry, gardening, with a special love of flowers. She was an avid bird watcher, puzzle builder, baker, canner, quilter for kids and grandkids. She was active in her church and bible study group and always had goodies (krispy bars) made for the great grands when they stopped after school. Willie will be remembered for her love and her sweet spirit. She was so thankful and so proud of her entire family. She will be truly missed by them all.

Recessional Hymn – “When We All Get to Heaven”

“I Want to Stroll Over Heaven With You”

“Go Rest High on that Mountain”

To send a flower arrangement or to plant trees in memory of Willanore "Willie" Ruby, please click here to visit our Sympathy Store.

To order memorial trees or send flowers to the family in memory of Willanore "Willie" Ruby, please visit our flower store.