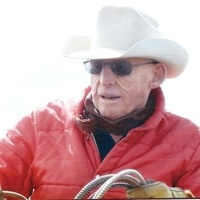 Bill's life celebration will be held Friday October 18th at 2pm at the Harding County High School in Buffalo and officiated by Pastor Henry Mohagen. Visitation will take place between 5 and 7pm Thursday October 17th at Leverington Funeral Home of the Northern Hills in Belle Fourche.

William H. was born September 20,1926 in Deadwood, SD to Lena (Mitchell) and Colonel James Vroman. He was raised on the Meathook ranch, 20 miles SE of Buffalo with an older brother, Colonel James Jr. (CJ) and older half-sister, Willo. He grew up doing much loved ranch work including breaking horses and tending to cattle.

One cold, winter day, Bill rode over the buttes to have dinner with neighbors, Buzz and Esther Wammen. It was there that he met and fell in love with Esther's visiting younger sister, Verona Heck. The two married on November 7, 1947 at the Wesleyan church in Mitchell, SD and began their life together on the XX Ranch outside of Buffalo. Bill and his brother, CJ, continued ranching with their parents until 1952 when their father died and they purchased the ranch from their mother.

Bill and Verona spend the majority of their years on the ranch with their 3 kids raising beef cattle, ponies, and horses. In true cowboy fashion, Bill taught all the kids ranch work including how to break horses, to rope, and to ride. The kids spent a lot of time competing and placing in rodeos.

A love of flying allowed Bill the opportunity to fly the ranch's Super Cub to check cows and water on the XX and neighboring ranches daily. He also took longer trips from time to time. In 1960 Bill flew the family's Cessna 172 to San Antonio to visit his sister, Willo, stopping in Missouri to visit Verona's father on the way home. The family also traveled to Seattle for the World's Fair in 1962 and many other states for rodeos throughout the years.

Always active in his community, Bill served as a member of the Masonic Lodge, Harding County Weed Board, Stockgrowers Association and Harding County Commissioners. He was an enthusiastic supporter of the Beef industry and donated meat to the Labor Day BBQs in Buffalo along with many other community events.

Bill and Verona enjoyed taking trips with the Elite Club, travelling to Branson, Nashville, Alaska and Washington DC. Every winter, for 40 years, they drove to Arizona to visit their daughter, Linda and her family and other friends. They were gracious hosts for family reunions some summers, a living nativity scene in the barn every Christmas, and they never turned away a coffee guest.

In 2000, Bill and Verona moved into Buffalo as sons Mark and Larry took over the ranch. For Bill, retirement meant less time being a cowboy and more time being "Gramps." He loved watching his grandkids and great-grandkids grow up and they all agree he made the best pancakes you'd ever taste. His latest years were spent at Peaceful Prairie Estates in Buffalo, Judy's Assisted Living in Belle Fourche, and finally, Belle Estate in Belle Fourche.

As a thoughtful storyteller, Bill (Gramps) always had a tale to tell worth listening to. His stories of "the old days," hard work ethic, and his love for a juicy steak will surely live on through his family.

(At a Later Date)

To send a flower arrangement or to plant trees in memory of William H. Vroman, please click here to visit our Sympathy Store.

To order memorial trees or send flowers to the family in memory of William H. Vroman, please visit our flower store.